There are certain restrictions placed on advertising during, and outside of, an election period. These are contained within Part 13 Division 2 of the Electoral Act 1985 (the Act).

Enquiries or issues relating to the placement of signs in the public realm (i.e. height of signs, placement etc) should be directed to the relevant council as these matters are dealt with under the Local Government Act 1999.

A person must not publish or distribute, or cause or permit to be published or distributed, an electoral advertisement in printed form or through electronic publication on the internet unless:

This does not apply to:

Certain descriptions not to be used

A person must not publish or distribute an electoral advertisement or a how-to-vote card that identifies a candidate:

A person who authorises, causes or permits the publication of an electoral advertisement by any means (including radio or television) is guilty of an offence if the advertisement contains a statement purporting to be a statement of fact that is inaccurate and misleading to a material extent.

If electoral matter is published in written form (whether for sale or without charge) in a newspaper, magazine or other periodical, or in an electronic publication on the internet, the publisher of the matter must ensure the word ‘advertisement’ is included as a headline to each article or paragraph containing the electoral matter.

If the matter is published in a newspaper, magazine or other periodical, the headline must be in letters not smaller than 10 point or long primer.

If the matter is published in an electronic publication, the headline must be in letters of a size that will be readily legible.

No electoral advertisement more than 1 square metre in area can be exhibited on:

If 2 or more electoral advertisements are placed within one metre of each other, and exhibited on behalf of the same candidate or political party, they will be taken to be a single advertisement.

However, if such advertisements are displayed on different surfaces which interface at an angle of 270º or more, then they are not considered to be a single advertisement (see diagram below - click on picture to view in full screen mode). 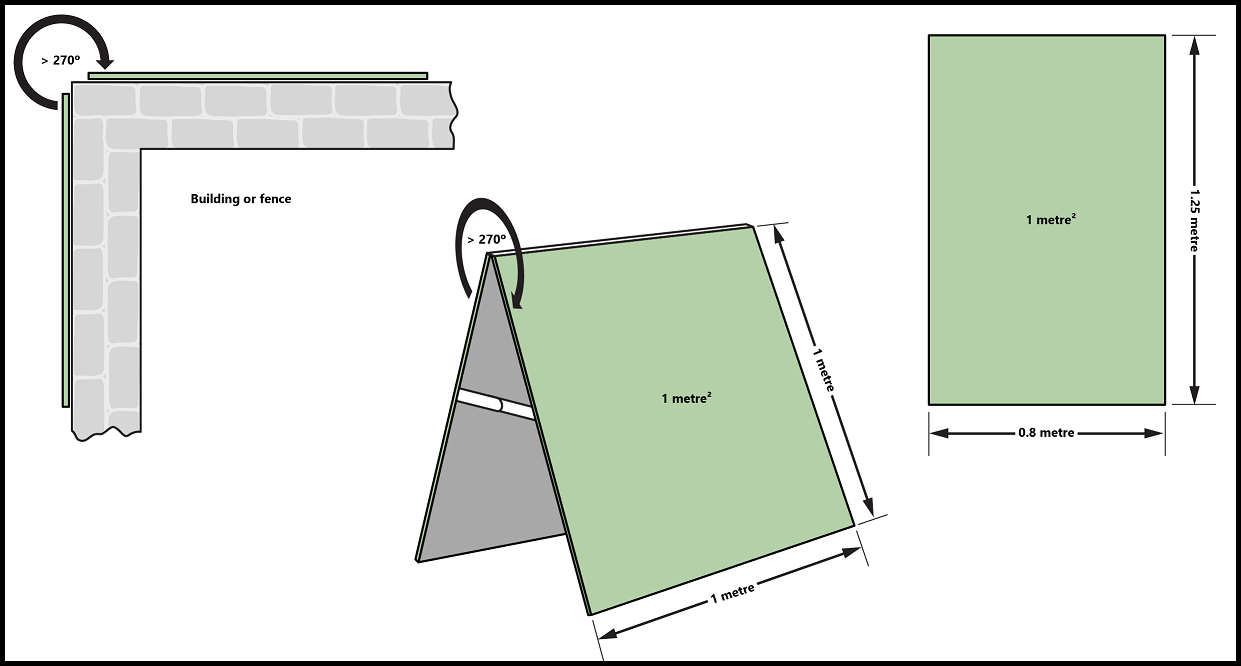 NOTE: An electoral advertisement more than 1 square metre in area may be projected on a screen at a theatre (including a drive-in theatre).

There is no restriction on the size of advertisements which exhibit the name of a candidate or a political party if they are displayed at or near an office or committee room of that candidate or political party, however they must not be posted within 100 metres of the entrance to a polling booth.