Counting the votes for the Legislative Council

A proportional representation system of voting called single transferable vote is used to elect members of the Legislative Council. This system has been used in South Australia since 1975.

In order to win a seat in the Legislative Council, a candidate is normally required to obtain a ‘quota’ of the formal votes. This quota - or minimum number of votes required to win a seat – ensures that winning candidates are elected with a near equal numbers of votes.

Counting the votes for the Legislative Council is both slower and more complicated than the count for the House of Assembly. On election night only first preferences are counted, leaving the major part of the count – i.e. the calculation of the quota, the distribution of surplus votes and the exclusion of candidates - to the days after the election.

Five steps are followed to count the votes for the Legislative Council: 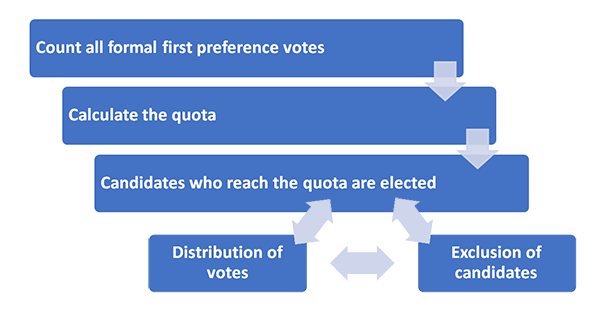 A detailed explanation of the steps involved can be found below.

Once all declaration votes have come in from across the state and around the world – which cannot take place until the final postal votes have been received seven days after polling day - the total number of formal (or valid) votes can be calculated. This number is essential for the second step in the process, calculating the quota.

3. Election of candidates who reach the quota

Candidates who receive a total of first preference (or number ‘1’) votes equal to or greater than the quota, are elected immediately.

It is possible, although very unusual, for this to lead to all the vacant seats being filled, and therefore, the election being finalised. It is much more frequent however, for the Electoral Commission to need to move on to the next two steps in the counting process.

If any elected candidates received more votes than the quota, their surplus votes are distributed to the remaining candidates according to the further preferences indicated on the ballot papers.

Because it is not possible to determine which votes actually elected the candidate and which votes are surplus, all the elected candidate’s ballot papers are transferred at a reduced value called a ‘transfer value’.

The transfer value is calculated as follows:

As surplus votes are distributed, other candidates may be elected. However, if at any point all the surplus votes from elected candidates have been distributed and there are still positions left unfilled, the Electoral Commission proceeds with the next step in the counting process.

Starting with the candidate who received the lowest number of votes, unelected candidates are excluded from the count. The excluded candidate’s ballot papers are distributed to the remaining candidates based on preferences.

If any of the remaining candidates obtain a quota through this process of distribution, they are elected.

Their surplus votes (if any) are distributed before any other candidates are excluded. This process of distributing surplus votes from elected candidates and excluding the candidate with the fewest votes is continued until all vacant Legislative Council seats are filled.

As a result of voting reforms before the 2018 State Election, the Legislative Council now has a partial preferential rather than fully preferential voting method. This inevitably leads to an increase in the number of votes that are ‘exhausted’ – i.e. ballot papers where no further preferences have been expressed. Once a vote has been ‘exhausted’, it must be set aside from the count.

Candidates elected without a quota

If, as a result of exhausted ballot papers, there are not enough votes left in the count to fill the remaining vacant seats, the candidate or candidates with the highest number of votes are elected regardless of whether they have reached the quota.